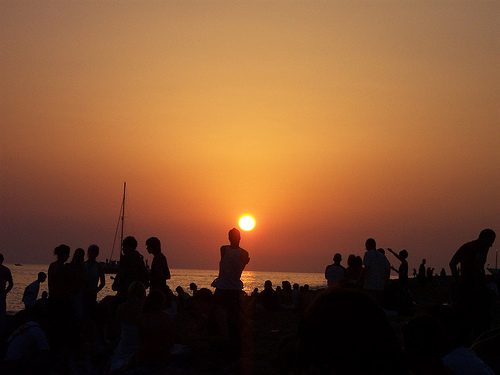 With the nights drawing in and the temperatures plummeting, summer seems a long time ago and next summer very far away.

If you’re missing the sunny days, long nights and partying with your friends then you check out what’s in store for 2014 in the party capital of Spain – Ibiza.

The famous summer long festival is held at the Ibiza Rocks hotel and runs from June to September every year. Pretty much every Tuesday for the entire summer, live acts are there to entertain partygoers on holiday in San Antonio.

Spain has always been a hugely popular party venue, particularly with the British and Ibiza is the heartland of the scene. Experiencing Ibiza Rocks will make your summer holidays even more amazing.

As usual, Ibiza Rocks rocked the island this year with a phenomenal line up including Foals, Ellie Goulding, Dizzee Rascal, Jake Bugg, Rizzle Kicks, Jagwar, Rizzle Kicks to name but a few.

Example and DJ Wire were there for the electro masses and took up an exclusive residency at Ibiza Rocks for the whole month of July.

At the time of writing, nothing has yet been announced, although if you want to have your say then head on over to http://www.ibizarocks.com/vote/ and vote for who you’d like to see rocking Ibiza underneath the summer sun next year.

Although your choice may not get on the stage, you can be sure that there will be an awesome line up. If Ibiza Rocks rocks your boat then you’re best getting in early and booking your place.

There are a few different packages and ticketing options available online to help you incorporate Ibiza Rocks into your summer holidays. Dreaming of it should help keep the winter blues away!

If you’ve already booked your summer holiday for Ibiza Rocks 2014, and you can’t quite wait that long, then you can get your skis on instead.

The Ibiza Rocks the Snow party takes place in December, January and February on the slopes of the Alpine ski resort Meribel. You won’t have the temperatures but you will have the music!

The line up includes Nicola Bear, Az and Tor and MC Slick Don among many others. However, if you’re after the sun, sea and sand then you’d be better off booking a straight forward last minute winter break to Ibiza – the temperatures will surprise you and, although there may not be a festival on, you’ll still be on the party island of the Balearics and can expect some awesome nightlife.

It could tide you over until next summer’s party!

Europe Festivals For the Love of Music Island Hopping

How to Keep Your House and Car Safe While Traveling