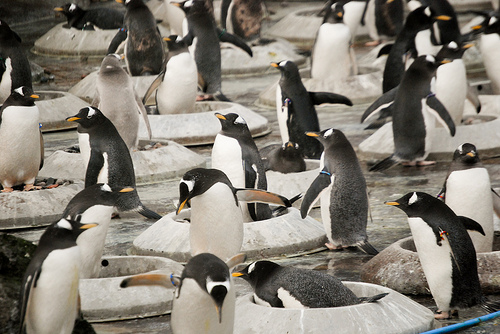 From elephants in Thailand, to the Big 5 in Africa and, uh, sheep in New Zealand, traveling often brings you into contact with wildlife you wouldn’t see back in your home country. On the top of our list to spot? Penguins! And they don’t just live in Antarctica…

Penguins are great swimmers but do not fly. These adorable birds live in the Southern Hemisphere and use their wings as flippers. Their time is spent between the ocean and on land.  They survive on krill, squid and fish and there are several different species.  The smallest is the fairy penguin, standing at only 40cm tall and weighing only a kilogram. The largest is the Emperor penguin, where adults stand at just over a metre tall and can weigh up to 35kg. Viewing these unique birds in their natural habitat is a rare opportunity not be missed.

Found in Namibia and South Africa, the penguins have 27 breeding colonies. The penguin population has declined to about 10% to what it was in 1900. This is due to predators such as feral cats and Kelp gulls, competition with seals for breeding areas and pollution. Penguin colonies can be seen at Boulders Beach near Simons Town, only a short drive from Cape Town. These penguins have adapted to tourists and seem to be quite happy being viewed by travellers.

The cold climate of this region is perfect for penguins. This is where the larger species of penguins are located as there is an abundance of food to be found in the cold waters. The weather in Antarctica can be very temperamental and extreme, but tourists may view penguins from the safety of a tour ship or if weather permits, may be allowed to go ashore.

Penguins can be viewed in the wild on Stewart Island and on the Otago Peninsula, south of Dunedin.  The Korora or little blue penguin can be sighted at Marlborough Sounds and Oamaru when they come ashore at night time. Take a wildlife tour to get up close to these delightful little birds.

Four types of penguins can be found all along the coast of Chile. Overfishing and eco disasters have made penguins vulnerable and have seen their numbers decline. You can still find many penguins using the southern Chilean coastline and offshore islands as a breeding habitat.

Famous for its penguin parade, the Phillip Island Nature Park located a 90 minute drive from Melbourne in Victoria, is held each night when the sun sets. Here you can see the smallest species of penguin in the world make their way to their burrows. Visitors are able to view the penguins closely from elevated boardwalks. There is a strict limit on the number of visitors allowed each night.

Penguins can suffer from anxiety, so it is best not to get too close. Many viewing areas are fenced off to protect the penguins from tourists and only allow the tourists to view these delicate birds from a safe distance. For an opportunity to see these gentle birds in their natural environment, check out the Cruiseabout website for cruises that stop in these areas. Offshore tours can be arranged where you can see these charming penguins for yourself.

Why Decide to Visit Dubai