European holiday breaks come in all sorts of shapes and sizes. From a cultural break in Rome to friend’s holiday to Amsterdam, this summer is the perfect time to open yourself up to the continent. But, why not make the most of the sun this year and head to a European music festival? Check out this top five. 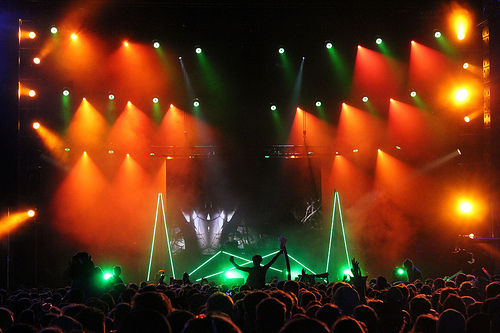 This is Germany’s answer to the Leeds and Reading festivals. Taking place from June 21st to 23rd, you don’t have long to get involved but with the Artic Monkeys, Bloc Party and SigurRos on the line-up it’s worth a look this summer. With Southside in the very north and Hurricane in the very south it’s up to you where you want to be. A rock, electro and indie feel, the latter started in 1973 with the former kicking off in 1999 and they’ve both been a huge success, growing into one of the biggest festival sets in the world.

Another one from the Germans, this camping festival in Ferropolis takes place from July 19th to 21st. A real rock and electronica fest, this was first organised in 1997 and last until 2002 before kicking off again in 2004. It is a unique location where it combines a big festival with huge 20th century machines in an open air museum. Goldie, Bjork and he Editors have headlined the festival in previous years and this year they host Azealia Banks, Alt-J and Soulwax amongst others. If you need a good place to stayfor Melt!, Hurricane or the Southside Festivals check out the Germany vacation rentals from Live Like a German. They have a large collection of quality rentals that can fit your festival needs.

Running since 2007, Optimus Alive! has been a hit. Despite being relatively young, they have had 10/10 ratings and been labelled as one of the best European festivals. From Pearl Jam to Bob Dylan to The Prodigy to Deftones to Coldplay, it has been headlined by a lot of famous names. This year, Depeche Mode, Kings of Leon and Green Day are headlining in Lisbon between the 12th and 14th of July.

Another with Green Day on the bill, this rock festival in the Belgian town of the same name, is an annual festival that has been going since 1976. It is one of the five biggest annual rock music festivals and runs from the 4th to 7th July. Vampire Weekend, SigurRos and Vampire Weekend are three other bands on offer at this hugely popular festival.

Another of the big five for Europe, this year from August 5th to 12th will see the 21st anniversary for this festival in an island on the Danube in Budapest. Editors, Blur and The Gaslight Anthem are some on at Sziget which has been labelled as the ‘Burning Man’ of Europe by some festival goers.

These are five of the best festivals to enjoy in Europe this summer. Alternatives include in Benicassim in Spain, TomorrowLand in Belgium and Exit in Serbia. Don’t overlook Croatia either as the Balkan state has become something of a festival haven in the last decade.