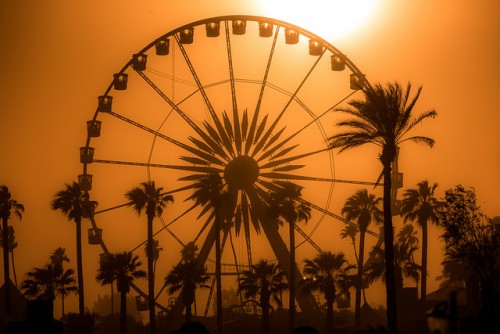 We’re all about music festivals – the perfect combo of music and travel – here at Land of Talk. This post is part of the momondo experiences series where momondo asked me to share some tips for surviving one of our favorites – Coachella!

The legendary Coachella Valley Music and Arts Festival was founded by Paul Tollett and is organized by Goldenvoice. It is held annually at the Empire Polo Club in Indio, California in the Inland Empire’s Coachella Valley. It is a festival that involves many music genres, including rock, indie, hip hop, and electronic music. There is also visual arts that include installation art and sculpture. There are five main stages where live music is continuously hosted. These stages are: Coachella Stage, Outdoor Theatre, Gobi Tent, Mohave Tent and Sahara Tent. There is a mix of both popular and established artistes as well as upcoming ones. It is arguably the largest and most popular music festival in the United States. The 2014 festival is scheduled for April 11, 12 and 13 and again on April 18, 19 and 20. The tickets, as has become the norm, sold out in less than 3 hours.

If you’re one of the lucky ones with tickets, read on…

As with other occasions where large groups of people gather, safety is of utmost importance, of both the person and their belongings. Don’t take anything valuable with you and try to stay with people you know.

The festival is held on desert land, so you need to carry at least a pair of sunglasses to keep the dust out of your eyes in case of dust storms. You will also need a scarf to cover your face, nose and ears in case of the same. Carry hot weather clothing as temperatures tend to soar during the day. Sunscreen is of course essential, unless you would like to have a patchwork of sun burnt skin.

Enjoy yourself, meet new best friends and part like it’s 1999…but stay smart about your choices and intake of…um…substances. As an extra precaution, travel with some basic medicines (like an anti-inflammatory or anti-biotic ointment) in case of any unexpected illnesses.

Carpooling is also a wise move. You get to save on fuel, and if you are spotted with a carpoolchella sticker, you stand to win life passes. Not just for the driver, but for everyone in the car.

There is a camping option, where attendees are allowed to camp on site where different amenities are provided. This was introduced in 2012, and thousands of people have made use of this facility since.

You’re at Coachella – make the most of it! To maximize your experience, try to stop at every stage at least once, soak up the tunes and take in the atmosphere!

Have you been to Coachella before? Any other music festival tips?

America Festivals For the Love of Music