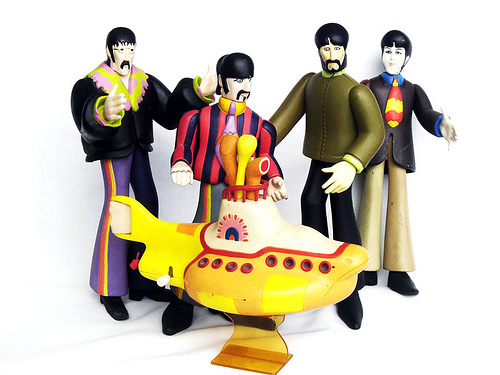 Formed in the 1960s, The Beatles are considered by most to be the greatest, and most influential rock band ever. The band consisted of four young men from Liverpool, England, John Lennon, George Harrison, Ringo Starr, and Paul McCartney, who honed their skills playing small clubs in Hamburg, Germany, and went on to achieve world wide success, while becoming the voices of their generation. You can’t think about the music of the 60s without mentioning the Beatles.

Even after breaking up, band members still went on to achieve individual successes. Each member released their own solo projects, but still worked with each other on some of the projects. John Lennon was murdered in December 1980, and George Harrison died of cancer in 2001, leaving Ringo Starr, and Paul McCartney as the last of the Fab Four.

The Beatles weren’t just busy writing number #1 hit song and dodging throngs of screaming fans though, they were on the road and traveling the world, often spending extended amounts of time in certain places that boosted their inspiration and creativity.

Here are some places that were significant in the rise of “Beatlemania,” that any fan planning a Beatles pilgrimage ought to visit.

This was where the Beatles perfected their craft performing in the city’s red light district. They lived in Hamburg at different times between 1960 and 1962 and recorded their first album there that was partially recorded in German. They were playing backup for singer Tony Sheridan, when they decided to record eight songs with Sheridan. Two of the songs, “My Bonnie,” and “The Saints,” were released on an album, which made it to fifth place on the German charts.

This is where the Beatles got officially introduced to the American public. They made an appearance on the legendary Ed Sullivan Show in New York, where a lot of music’s biggest stars, like Elvis Presley and the Rolling Stones, had performed.

When the Beatles visited Hong Kong in 1964, it was considered the most important day in pop history for Hong Kong. The Beatles were at the height of their fame, and their visit was said to have ushered in the era of Hong Kong’s English language rock.

The Beatles went to Rishikesh in 1968 to study advanced Transcendental Meditation with Maharishi Mahesh Yogi, the founder of the movement. The trip was well documented by the media, and helped to change the western attitudes about Indian spirituality. They had just lost their manager Brian Epstein, and the visit to the Maharishi provided some comfort to them, and helped them to deal with their loss. The time spent in India is also considered one of the most productive times for the band.

They supposedly wrote over 30 songs while in India.

A Beatles pilgrimage would not be complete without visiting the birthplace of the Beatles, you can go on some of the tours they have celebrating the Beatles, like the Beatles Story Museum, visit their childhood homes, or Visit Abbey Road recording studios. Any fan of the Fab Four will enjoy a visit to the town that celebrates them.

Are you a major Beatles fan and been to any of these places?

America Asia Europe For the Love of Music

City Breaks: Where to Go