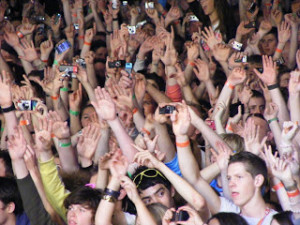 Each year in the UK, BBC radio station, Radio One, host a free concert. The festival is called Radio One’s One Big Weekend, but was previously called One Big Weekend. The event is hosted over several days in one city in the UK. Every year a new city is chosen to host the event. This is the biggest European music event that is free of charge.

An example of the popularity of this event is the show in Falkirk that attracted more than 500,000 attendees in 1999. The amount of people exceeded ten times the expected number of visitors. The promoters had to turn away a great part of the people. So a successful successor to the road shows organized by Radio 1 from 1973 till the 1990s is the festival called Radio One’s One Big Weekend.

This festival was once run twice a year, when the Saturday was defined for dance music only, while the Sunday was dedicated to bands. Some changes in the festival were made in 2005, when the dance day was replaced by one more bands’ day, but in 2013 it was reinstated again, so the event that took place in Northern Ireland this year included a day of dance. In 2013, One Big Weekend was held in the UK City of Culture, Derry/Londonderry, and ther star performance came from Macklemore.

Radio 1’s Hackney Weekend is another summer festival that replaced the Big Weekend in 2012, being the larger and  more famous one, with a capacity of 50,000 attendees. This great music event was organized in Hackney, East London in June 2012.

The Big Weekend this year become a three day event for the first time of its existence and took place in Northern Ireland. The great news is that the festival is totally free, except for a small fee for booking that is introduced in 2012.

Initially, the event was created to attract local residents in different places only, but with time more and more people from near and far started to attend the festival, so the organizers had to increase the event’s capacity.

Radio 1 initiated an online lottery in 2006 to give away tickets. The organizers ensured that a major part of the tickets are given to local people by splitting them into two categories: local and other postcodes. Although the tickets are given for free, many try to sell them on eBay, so many security measures are taken to limit this. Radio 1 holds numerous competitions and gives away tickets as prizes.

Radio One’s One Big Weekend 2013 was organized in the same city, which hosted Big Weekend 2004. The festival took place in May 2013 in Derry/Londonderry and continued for three days instead of two. The third day was dedicated to dance music. Some of the acts took part in the Two Door Cinema Club and Olly Murs stages in Ebrington Square. Both stages used in 2012 were in one venue.

Some other headliners for 2013 were DJ Calvin Harris, Biffy Clyro and Bruno Mars. Forty more artists played at the free three-day festival. The festival in 2013 was from 24 to 26 May with the participation of Chase and Status, Bonkers Dizzee Rascal, Rita Ora, the Saturdays,   The Voice groupies and other big names.

Rumor has it Radio One’s One Big Weekend will be hosted in Glasgow, Scotland this year, as the city is also hosting the Commonwealth games. If you have a chance at winning a ticket in the postcode lottery, get ready to spend a day waiting for tickets to go live. Who knows what top acts you have a chance to see perform.