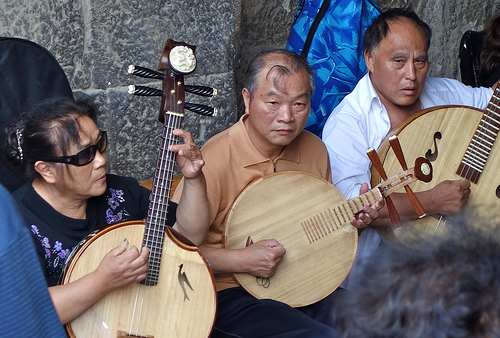 Modern music as we know it has been developed from musical styles and instruments from around the world. Just try listening to the radio; you’ll soon pick out the songs’ influences, the ways that music is created the genres and instruments that hark back to its musical heritage.

While North America is known for some of the world’s biggest music stars, its musical heritage has received inspiration and influence from around the world. Country and Western, for example, draws on the folk music of ancient England, Ireland, Scotland, and Wales, using instruments such as fiddles, banjos and guitars, and vocals to tell stories of living on the plains. Bluegrass, meanwhile, incorporates the music of African American slaves and draws on jazz influences. Coming much later, rock ‘n’ roll, which is still popular today, combined African American genres such as blues, jazz, and gospel, as well as Country and Western and utilized pianos, saxophones and guitars to create instantly recognizable melodies.

These genres are still in existence, and have been adapted into the popular modern tunes that you hear every day.

Think of South America’s musical heritage and you will be drawn to the ethereal qualities of the panpipes, ocarinas, and drums that have their roots in the continent’s native mountain communities. Or imagine the rhythm and passion of Latin America, the speed of the Mexican Mariachi band, or the drama of the tango. These, like many other musical genres, trace back to ancient civilizations. Ocarinas, like those that can be purchased from Songbirdocarina.com, originate from Central and South America, where they were used by the Mayans, Aztecs, and Incas, – as well as from China and India.

European music has significantly influenced many other genres. A diverse mix of indigenous and folk music, that has carried its traditions throughout the continent, Europe’s musical heritage is embedded in its communities and has developed over the years into music you may recognize today. Europe is home to several recognizable instruments, including bagpipes, accordions, fiddles, lyres, and the grand piano.

Europe is also the home of classical music, featuring famous composers, large and complex orchestras, and pomp and circumstance.

A vast and varied continent, Africa’s musical heritage is equally diverse. Traditional African music was passed down orally from generation to generation; it traveled between communities without ever being written down, meaning that much of what exists today has survived the test of time. Much of Africa’s music relies on percussion, featuring rhythmic drums and rattles, xylophones and wind instruments to add melody, and vocals to tell a story.

Much African music was created to serve a function; whether it was a celebration, a formal occasion, to bring luck, or to ward off spirits, many of the songs and compositions that still exist today served a far greater purpose than entertainment.

So next time you’re listening to the radio or enjoying your favorite album, see if you can identify any of the examples given above; you’ll be surprised by how far your music has traveled.

Top 5 Places to Visit during the Summer Holidays