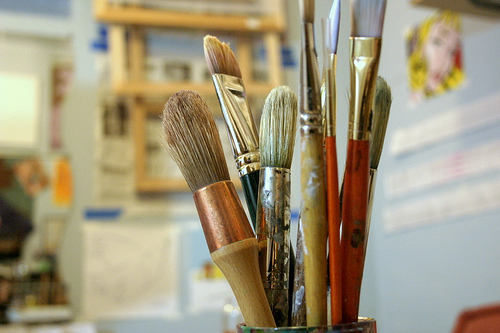 Mainland Spain may have Picasso, but the Spanish island of Lanzarote has Cesar Manrique – artist, architect and environmentalist. This was a man who had a massive influence not only in the art world, but on the very landscape and traditions of his homeland – and today’s post is dedicated to telling you all about his life and work, not to mention what Manrique-made attractions you shouldn’t miss when visiting Lanzarote.

And while I’m on the subject of holidays, I’d just like to highlight that Lanzarote is absolutely perfect if luxury is what you have in mind. As you can no doubt already tell, it’s incredibly rich in culture, while its lunar-like landscape, spectacular beaches, glorious sunshine and lavish hotels make it an all-round must-visit. Sovereign Luxury Holidays also recommends visiting some of the island’s pretty villages, while this website is a useful resource for finding luxury hotels too.

To say Cesar Manrique was a man of many talents is something of an understatement. While painting was always his key passion, he was also a keen sculptor, not to mention architect, environmentalist and landscaper – in fact, you could say his buildings and landscaping are what he’s most remembered for today.

What’s interesting about Manrique is that despite having a long list of achievements in such diverse fields, he was led by just a few guiding principles – most significantly about his native Lanzarote. Running through all his work was an unquenchable passion for the local landscape and nature, and a desire to make sure people across the world saw Lanzarote through his eyes.

I’ll take a look at exactly how he achieved this later on, but for the moment lets turn our attention back his to the story of his life. Born in Arrecife (Lanzarote) in April 1919, Cesar was part of the middle class Manrique family.

His passion for Lanzarote was cemented in 1934, when the family built a house in Caleta de Famara, which was right next to the ocean. From then on they spent their summers there, and Manrique claimed that the image of that stunning area with its sparkling beaches and towering cliffs was something he’d never forget.

He managed to hold on to this passion despite the turmoil of the next few years, when he fought in the Spanish Civil War – an experience he found so traumatic that he would never talk about. After the war, he began studying architecture before abandoning his work and, in 1945, leaving for Madrid to study at the Academia de Bellas Artes de San Fernando.

After graduating as a professor of art and a painter, Manrique changed shores again, this time moving to New York where he mingled with other artists. What’s most interesting about his time here, though, is that it acts as a catalyst to his return to Lanzarote, driven as he was by nostalgia for the place. He disliked the New York lifestyle, comparing it to being forced to live like a rat amid artificiality.

His chief goal in returning was to promote Lanzarote. In his mind it was the most beautiful place on Earth and he wanted everyone else to see it the way he did. To achieve this, he set about campaigning for traditional housing, a removal of billboards and, above all, a respect for the natural environment.

Manrique died tragically in a car accident in 1992 – but his legacy lives on not only in Lanzarote, but also Tenerife and mainland Spain. If you’d like to learn more about him, visit this website.

If you’re travelling to Lanzarote and you’re interested in Manrique, then the Cesar Manrique Foundation is the first place you should go. This is more than just a tourist attraction; it is a non-profit organisation that aims to keep Manrique’s ideals alive through promoting artistic activity and studying the artist’s life and work.

As an added bonus, it’s housed in what is probably the building that best represents his ideals – his former home in Taro de Tahiche. No ordinary house, this place was designed by Manrique himself and is located on the top of an old volcanic trail. Its most remarkable feature is the fact that the rooms in its lower levels are crafted out of five natural volcanic bubbles – an ingenious marriage of landscape and architecture.

The exterior and upper level, meanwhile, take the form of a traditional Lanzarote home. This is also really telling of Manrique’s principles, since as well as pushing for respect of the natural environment he campaigned for traditional building styles to continue.

It’s worth remembering you can also see work by Manrique on display in the gallery here. Plus, you’ll get a few pleasant surprises in the form of works by other artists – including some by Manrique’s role model Picasso!

Top Manrique sites in Lanzarote and beyond

Happily, the Cesar Manrique Foundation isn’t the only place in Lanzarote where you can learn about the man’s life and work. I particularly recommend a trip to the Jameos del Agua, a spectacular grotto that was, in fact, Manrique’s first construction on the island.

You’ll find the grottoes tucked inside a volcanic tunnel, and descend into them via an incredible staircase forged from a mixture of wood and volcanic rock – one of the real highlights of a trip here. Keep your eyes peeled for the natural vegetation before moving on to the incredible natural underground lake.

This is a truly remarkable feature, so take the time to enjoy it. You’ll actually get to cross it via footbridge, heading next to a landscaped wall and the second chamber.

Another unmissable attraction is Casa del Campesino. This house was built by Manrique as an example of how he thought homes should be built on the island. Located smack bang in the centre of Lanzarote, it is also where you’ll find the Monumento al Campesino, also designed by Manrique.

By the way, taking a stroll around the home is also a great way to get a feel for the island’s history in terms of culture and agriculture, since it displays lots of tools and other artefacts.

Before I finish up, I’d just like to point out that while Lanzarote is the best place to learn all about Manrique, his influence can be felt far beyond the island. Head to Tenerife, for instance, and you’ll discover several places designed by him (including the Parque Maritime Cesar Manrique), while mainland Spain is also home to a fair few of his designs, such as the La Vaguada shopping centre in Madrid.

Sounds of Summer Down Under