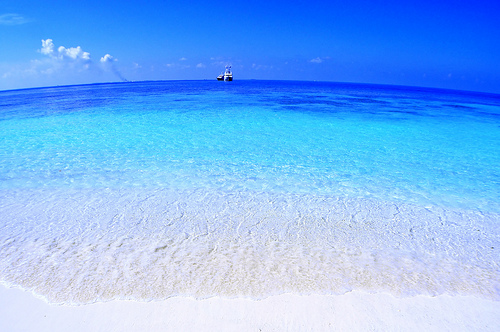 We’ve been seeing more and more people heading to the Maldives and wanted to do a little investigating…why are they such a hot destination? Actually…where they are they? So…

The Independent Republic of Maldives, also known as the Maldive Islands, has always been in the top list destinations for beach enthusiasts. This unique archipelago offers hundreds of lush islands, surrounded by the clear bluest water and lined with the whitest sandy beaches that attract a lot of tourists and travelers.

Maldives is located in the Indian Ocean, about 500 kilometers from Sri Lanka and India. This unique nation consists of a double chain of twenty-six atolls that group 1,192 coral islands, oriented north-south, and lying between the Chagos Archipelago and Minicoy Island. The archipelago is spread over roughly 90,000 square kilometers, thus it is considered as one of the world’s most dispersed countries. Maldives is the lowest country in the world, with a maximum natural ground level of only 2.4 meters, with the average being only 1.5 meters above sea level.

Portugese dominated the country in the Sixteenth century and carried the status oof a British Protectorate from year 1887 to 1965. However, Maldives has been an independent archipelago for at least twenty-five centuries.

The population of the Maldive Islands is a little more than quarter of a million, sharing a common language known as Dhivehi and an Islamic religion. The people unite as one solid and peaceful society. Maldivians are in general not race-bias, probably because of the visitors from diverse nationalities that inhabit the country for centuries.

Maldives has a tropical climate with no major seasonal differences. Southwest monsoon brings most of the rain around the months of June and July, but tropical rain showers can occur at no particular time. The skies are typically clear and the sun shows up and shines brightly.

Indeed, Maldives is really a paradise on earth where you can leave the hustle and bustle of the city life and get close to the nature.

Packing for a Ski Trip

Upcoming UK Concerts Worth Traveling For