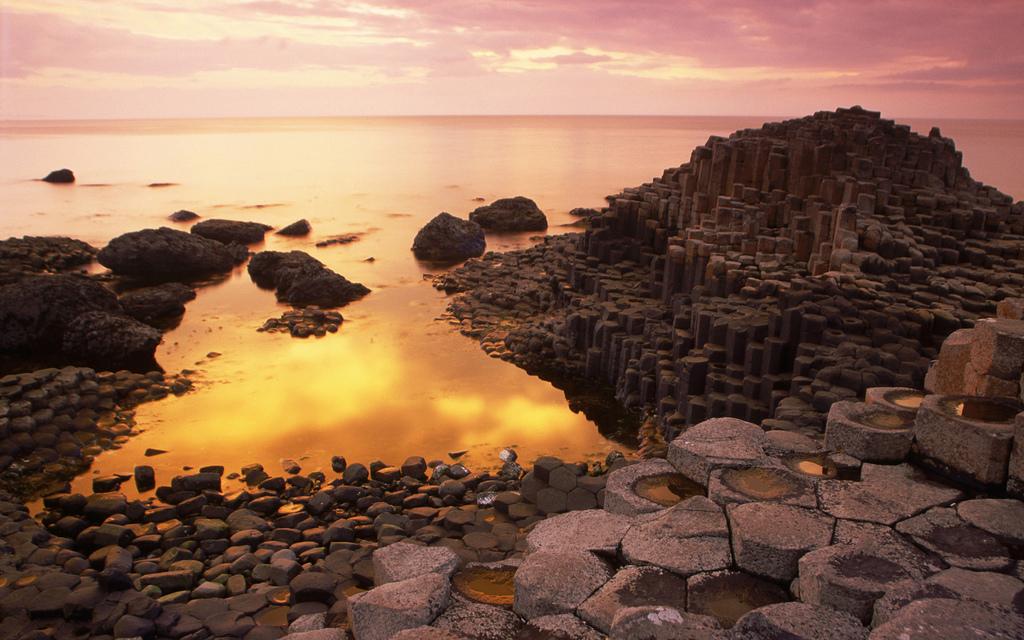 The Giants Causeway is a famous rock formation situated on the coast of Antrim, Northern Ireland. Over half a million tourists visit this iconic structure every year and it is easy to see why the appeal never dwindles. The 40,000+ columns of basalt which emanate from the sea like miniature hexagonal cities make for an absolutely spectacular sight. It is Northern Ireland’s only designated UNESCO World Heritage Site and is definitely worth a visit.

The Causeway itself was formed over 60 million years ago as a result of a volcanic eruption. The interlocking basalt pillars were created from the cooling of lava, which had emerged through fissures in the earth’s crust and formed a plateau. The cooling of the lava into what we see as the iconic symmetrical set of pillars is what makes this such a unique and remarkable location. The reason for the distinct pillars is due to variation in the cooling rate of the molten rock. The sheer ancient history of how it was formed is enough of a reason to visit – when you view The Giants Causeway you are literally getting a peek into Earth’s primitive past. The volcanic activity in this part of the world has long since ceased, but the remnants are quite stunning and profound. Often we are terrified on the news by the destructive forces of nature such as tsunami’s and earthquakes but The Giants Causeway is a prime example of the beautiful structures that nature can create.

The above is the scientific explanation for the brilliantly bulging basalt pillars, but it is also worth visiting The Giant’s Causeway to learn in depth about the mythical story background to this location that the locals believe. In essence, the story goes that an Irish giant by the name of Fionn Mac Cumhaill built this stunning pathway from Ireland to Scotland so he could prove his prowess in battle against his Scottish rival Benandonner. there are different versions of the myth but in one version, Fionn defeats Benandonner and returns successfully to Ireland. There is a lot more versions of the story but that is the main gist of it. The visitor’s centre provides an extremely in-depth background about this though and it costs around £9 GBP to enter which is a bit of a steal considering all of the amazing information and stories you learn.

To add credence to the aforementioned story, there is one particular structure that has an adopted name of “The Giant’s Boot”. Locals say that this proves the myth about Fionn Mac Cumhaill as it resembles the boot of a giant. Whether that is true or not, the Giant’s Boot makes for a stunning photo opportunity to impress your friends with. The curve in the boot naturally caters for a human to lie down in it and makes for a fantastic and memorable picture.

The Giants Causeway is also a great location to visit for people interested in bird-watching or ornithology. The location is home to a number of quite beautiful seabirds including the guillemot and the petrel. The idyllic scenery and spectacular hexagonal columns provide a wonderful backdrop to watching some amazing seabirds in full flight. The area is also a ideal for people who are interested in rare plants. The frog orchid and sea fescue are particularly striking among the rugged coastal scenery and are not to be missed whether you are a casual admirer of flowers or a full-blown botanist.

The amazing thing about the Causeway is that it has something for everyone. The basalt pillars themselves are worth seeing whether you are a geology fan or merely somebody who appreciates the sheer rugged beauty of nature. The history and myths behind the scenes are worth learning about and provide a fascinating insight into overall Irish mythology. Many people have been inspired to travel all around Ireland learning about the myth’s and ancient legends just from visiting The Giants Causeway. As mentioned before it is also a wonderful area for bird-watching and exploring some rare plants. It really is a location that caters for every tourist. Half a million people per year can’t be wrong and this stunning structure is most certainly worth a visit if you are planning a trip to Northern Ireland.

Will You Still Need Your Glasses After Laser Eye Surgery?