The Rainforest World Music Festival is an annual three day music cultural program which is being held in the city of Kuching in Borneo. It is one of the largest music festivals of the world with more than 30,000 audiences. It is held in order to celebrate the diversity in world music. The festival is generally held on the end of June month. This year (2013) the festival will be held from 28th to 30th June. The festival displays music shows, workshops, concerts and cultural displays etc. A variety of traditional and modern music are performed during this festival. Traditional instruments are used in order to emphasize the importance of them. Famous artists from various countries come here to perform during the Rainforest Music Festival. 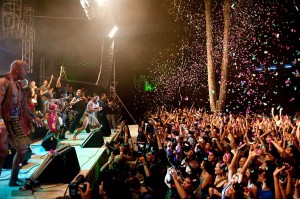 History of the Festival

Randy Raine, Robert Basiuk and Edric Ong were the first to start the festival. It was first held in the year 1997at Kuching. The initial funding and foundation was laid by the Society Atelier, Sarawak. In the later years the tourism board of the state took initiative and developed the idea in a great way. During the initial years only 400 people attended the festival. Currently, thousands of people from various attend this festival every year.

The festival is an international level festival and there are various options for accommodation in and around Kuching. People can choose their hotels nearby the festival village to stay or even choose packages for staying along with the music tickets. Deluxe rooms and Dom rooms are available for stay. They are pretty cheap when bought along with the ticket. These rooms provide breakfast and one lunch for free. The price of a ticket plus a deluxe room for one person is RM 298 and for similar package the price of the Dom room is RM 198. Tickets can be booked through phone or online via rwmf.net, the official website of the Rainforest World Music Festival.

The festival is one of the largest of its kind in the entire world. The number of people attending is definitely increasing every year. With power packed performances from various artists from all over the world, the festival is full of surprises and entertainment.

The Blues Scene in New Orleans