High-speed launches, white-knuckle twists and turns, loop-the-loops – theme park rides are a thrill seeker’s dream. California is home to some of the world’s most exciting theme parks, including the likes of Disneyland Park and Knott’s Berry Farm. The question is, just which rides should daredevils make sure they don’t miss while they’re in the Golden West? 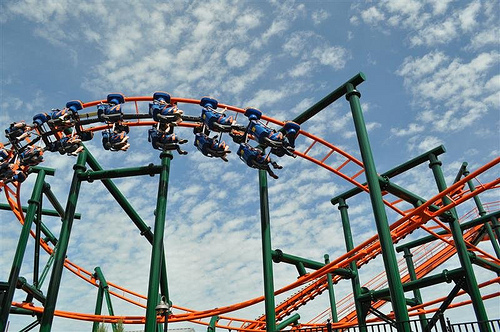 Given the sheer volume of thrill rides and rollercoasters here, that’s actually a pretty tricky question to answer. Luckily for you, though, we’re not scared of a little hard work and have put our heads together to come up with a list of the ultimate top five fast-paced thrills in California. So, all you need to do is peruse our selection and pick out your favourites – well, and book your break, of course! If you fancy making rides the focus of your trip, it’s probably worth basing yourself in one of the theme parks’ many hotels for the duration of your holiday in the Golden West.

But let’s not get too bogged down in practicalities for the moment – not when there are rides to find out about! We’ve aimed to spread our top five out across a variety of parks, as well as to make sure they offer quite distinct experiences from each other. Fingers crossed, that should mean we’ve found something to appeal to just about everyone – everyone with a sense of adventure and a daring spirit, that is!

Our first ride is brand new for 2013, which means it’s bound to have adrenaline junkies everywhere tingling with excitement. Full Throttle is a rollercoaster that’s broken records, being the world’s tallest and fastest looping rollercoaster to date. While that’s all very impressive, it’s not actually the height of the loop (160 ft) that actually strikes us most. What we find exciting is the fact that as well as getting to go through the loop in the usual way (i.e. on the inside), you actually get to whizz round the outside as well. Riding along the top like this has the added bonus of giving you absolutely mind-blowing views of the park – provided you’re brave enough to keep your eyes open!

Our next suggestion is Supreme Scream – a ride that’s been very aptly named, we think. If you’re looking for the absolute ultimate thrill and shock factor, this ride is pretty hard to beat, since it propels you straight up in the air a whopping 254 ft, before letting you plunge right back to earth at a blood-curdling 50 mph. At just 45 seconds long, this ride isn’t exactly the longest you’re likely to experience, but we think this actually adds to the thrill – everything happens so quickly that you have no time to adjust to what’s going on!

Ever wondered what it feels like to be a boomerang? No? Well, to be frank, we hadn’t either – until we heard about the dizzying Boomerang. Another ride that lives up to its name, it’s very different to Supreme Scream in that it’s a more traditional rollercoaster, but that doesn’t mean it offers the same old thrills. No, Boomerang jettisons you into a white-knuckle adventure that inverts you no less than six times – all in the space of 60 seconds! And, just in case that’s not enough, it then whips you across the track backwards too.

Next up we have the deservedly famous Space Mountain, which you’ll find in the Tomorrowland sector in Disneyland Park. What’s great about this ride in particular is the whole atmosphere that’s created around it – the idea is that you’re boarding a shuttle and being launched into space and, we’ll tell you what, it feels like that too! The ride has a fantastic inbuilt sound system (which, incidentally, is the first of its kind) that means the high-speed twists and turns are accompanied by suitably spacey noises.

Last up, we have something a bit different for you. As you’re probably aware, Universal Studios Hollywood offers you a taste of the silver screen, and one of its latest rides is among its most exciting yet. Transformers: The Ride-3D combines HD film action with the latest flight simulation technology to plunge you right into the heart of a story – and one that’s not for the faint-hearted at that. You’ll be helping Optimus Prime and the rest of the Autobots protect the AllSpark from those dastardly Decepticons – a battle that’s a thrill a second!

A note on height requirements: To help you work out which rides are suitable for you and your children/friends, we’ve added the height requirements of each. Some rides, however, are new and no height information was available at the time of writing – but that doesn’t necessarily mean there aren’t any restrictions. So, be prepared to be greeted with one once you arrive just in case.

5 More Festivals You Need to Get To

A Guide to Seeing the More Laidback Side of LA