In part one of this post, we showed you some of the top sites and attractions for your road trip out west to California, Arizona, and New Mexico. Moving forward with pat two of The Great American Road Trip, let’s take a look at what the rest of Route 66 has to offer—as well as some packing advice to help you prepare for the long days on the road: 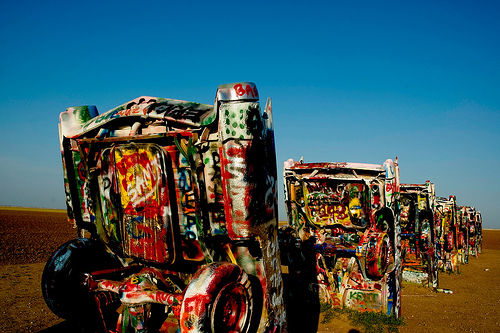 Created in 1974 by art group Ant Farm, this public art installation is easily one of the most recognisable landmarks along Route 66. The “ranch” features ten Caddies half-buried, nose-down into the ground, and visitors are invited to bring their own spray paint to decorate the cars, making this highway exhibit an ever-evolving piece of artwork. Be sure to visit and leave your own mark on this iconic exhibit!

In the early 1970s, entrepreneur Hugh Davis decided to convert his private pond into a waterpark. The star attraction of that waterpark was The Blue Whale, a colossal blue concrete statue that was presented as a gift to Davis’ wife, Zelta, on their wedding anniversary. Although the waterpark closed in the 1980s, the local community preserved The Blue Whale as a roadside attraction along Route 66, and it’s been popping up in travellers’ trip photos ever since!

Catch a movie out under the stars with an evening stop at the Route 66 Drive-In Theatre in Carthage, Missouri. One of the last remaining drive-ins along the route, you can watch a double feature for the bargain price of $7 USD. The concession stand not only offers traditional treats like popcorn and soda, but BBQ sandwiches, hot dogs, and chili dogs as well. Yum.

End your tour of the legendary Route 66 with a stop at one of its many historical museums. The Route 66 Hall of Fame Museum in Pontiac, Illinois is a particularly good choice, as it houses a restored Conoco pump and Steak and Shake diner booth from the town of Normal, Illinois. You can also catch a glimpse of the bus and van used by artist Bob Waldmire.

Preparing for Your Trip

Versatility is key when packing clothes for a road trip in the U.S. In the daytime, you’ll want to wear fabrics that are cool and lightweight, while in the evening hours, you may find yourself needing a jumper or a jacket—especially if you’re headed to the drive-in! Try this promotional code to get cheap clothing for the trip.

Make sure you have an emergency kit in case of a breakdown. Flashlights, electricity power converters, snacks, water, toiletries, and a few pillows and blankets will help you rough it out in case you get stranded on the side of the road.

Unique and Unusual Accommodation Around the World