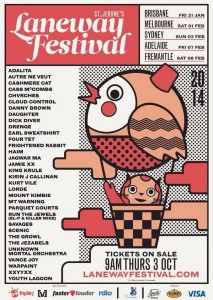 The Laneway Festival first began in 2004 in Melbourne, Australia. Known as St. Jerome’s Laneway Festival it started as an indie event with music and quickly grew in popularity. On the 14th of September 2013, this festival made its first appearance outside Australia Detroit, Michigan.

The initial concept of the Laneway Festival in 2004 is attributed to Danny Rogers and Jerome Borazio.  A series of bands were booked by them for St Jerome’s bar and this led to the first event being inaugurated in 2004. The Laneway Festival was inaugurated immediately after they conducted a “Summer Series” of regular monthly events entitled “Brains” which showcased different bands.

The festival that started at the St. Jerome’s Bar in Melbourne quickly expanded to other parts of Australia. In 2006, it was conducted in Sydney, followed by Brisbane (2007), Adelaide (2008) and Perth (2009).  Pitchfork Media rated the pop music as “Australia’s most insurgent and unique”.

In 2009, an announcement was made to conduct this festival in Auckland and move to New Zealand in 2010. A press conference was held on 15th November 2010 in Singapore announcing the expansion to Southeast Asia. The festival was conducted at Fort Canning Park, a historic spot in Singapore. Temper Trap was to make a guest appearance and this was headlined at the press conference.

The Laneway Festival made its North American debut in Detroit on 14th September 2013. The co-headliners, The National and Sigur Ross were included in the lineup according to the announcement made on 13th May 2013.

It has been a demanding year for these festivals in Australia and fans have found it increasingly difficult to tour to different places to attend these events. Therefore, the recent lineup announcement by Music Feeds that the Laneway Festival will be held in Australia made punters ecstatic about being able to attend the festival.

In typical Aussie style, the organizers of this festival have employed Tom and Alex from “The Tom and Alex Show” on Radio Station Triple J to promote and highlight the festival this year after their success last year. Tom and Alex informed their Twitter followers that they felt like Santa Claus as they introduced and interviewed the headlining acts!

CGVRCHES, a synth-pop trio from Glasgow confirmed their attendance to Australian music website Music Feeds when they were interviewed in August.

Savages, from UK are a four-piece post-punk group who performed in Detroil at the US Laneway inaugural event. Fay Milton the drummer informed interviewers that he had attended the festival before and they would play in May in Australia.

Though Laneway is a newcomer relatively to the festival scene, they have become quite an institution. What started in 2004 in Caledonian Lane has risen above the other festival events due to its unique musical genre.. The size of the names that have been included in the lineups has increased considerably to improve the popularity of this festival. Sigur Ros, The National, M83, Bat for Lashes and Deerhunter are some of the great names that have played in the Laneway events.

The 2014 Laneway Festival will begin on 25th January (Saturday) in Singapore. They will start at The Meadow, in Singapore (at the Gardens by the Bay). From there, they will cross over to Auckland in New Zealand before returning home to Australia. The event will start in Brisbane on 31st January (Friday) at RNA, Fortitude Valley.

Tickets’ price is about $80 and includes the fees for parking, while “Early Bird” tickets cost about $65 per ticket. The attendees will enjoy festival features like free Wi-Fi access, five outdoor stages and over 115 artists for the whole world. More than 107,000 music fans attended the festival last year.

The Festival of Color