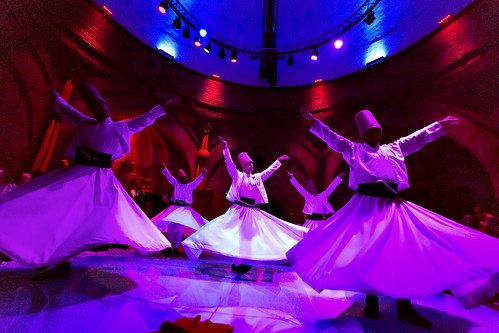 Visit Turkey this winter for a truly unique December: Rumi Festival is an event that celebrates the work, influence and life of mystic poet Rumi that lived in 13th century.

The celebrations start on Friday night with a performance of popular Turkish ney player called Kudsi Erguner. The following two days are full of participatory events, talks and music, as well as dance and theatre in honor of Muslim’s poet Mevlana Jalaluddin Rumi, whose work is internationally acclaimed.

Rumi is actually a giant of literature and art world, being an inspiring sample for thousands of musicians, artists, poets and lovers of fine art. He was born in Persia and is considered to be even more than a Middle Eastern culture’s icon. He inspires his followers with his message of tolerance, love and kindness, teaching that every human being in the world is significant enough to be respected by others.

Rumi Festival is a great reason for all Rumi followers to gather in one place. All those who love beauty, truth and unity, can join this big celebration in Turkey, where word, music and dance are celebrated, aspiring to harmony and peace. Here is the place where visitors will see all beauty expressions.

Mevlana Festival is held for two weeks during the winter, while its culmination is on 17 December, when Muslims celebrate the anniversary of wedding night between Mevlana and Allah. This is a period when many tourists and guests come in Turkey from near and farm, so it is advisable to book your accommodation and tickets in advance. Actually, more than one million admirers and pilgrims visit annually this significant for them event. Their beloved teacher and philosopher, Rumi, has been buried in the city of Konya.

This year, 2013, marks the 740th anniversary of Rumi’s death. There are many places around the world that commemorate this event, however, Turkey is considered to be the centre of this event. The most spectacular celebration is held in Konya, where you can see the event in its full glory. The festival begins on December 7 at KonyaMevlanaCulturalCenter, where visitors are witnesses of a magnificent show. The festival continues until the evening of December 17, which is called Seb-i Arus that means the “Wedding Evening”.

The whirling dervish ceremonies, also called semas, are the main attraction during the festival. Dervishes, who are from the Konya Turkish Sufi Music Association perform these special dances twice a day. These semas are breathtaking and continue for about three hours each. People believe that the dancers are intoxicated by a divine ecstasy, which give them power to twirl around like dreidels while the music band plays uplifting melody.

However, sema performances are not the only attraction during these celebrations. More than 150 other events take place during the Mevlana Festival, like different conferences, symposiums and plays in honor of Rumi and his teachings.

The anniversary of the saint Rumi is also celebrated during the festival of the Whirling Dervishes. He has taught his followers that it is possible for the human beings to communicate with God through a dance. This has been the origin of the dance of the whirling dervishes, who dance dressed in black cloaks, white flowing robes and conical headgear. Their dance turns into trance with a palpable energy flow.

While the main attraction in Turkey in December is the Rumi Festivals, do not miss traditional Turkish Bazaars which adopt a Christmas theme, like other Continental Christmas Markets. The quaint and exotic markets line the streets where you can see free performances from Whirling Dervishes.

The Race To Christmas Number One